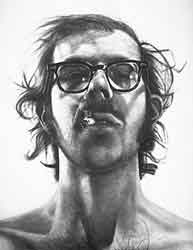 The more you explain, the weaker your position.

I was watching this show that had a character with a damaged, gravelly voice. But they didn’t explain it at first, and I thought it was great. It was subtle, textured storytelling. Because it opened up this little mystery within the show that could have lead in many different directions — but the point is it was sticky. It was another little surface to grab our attention, to make us think and wonder and fill in our own explanations. It was a little hook that didn’t matter that much at all, but it did, because it added up to the whole. Immediately I was like “huh, this battle-hardened commander guy has a ruined voice. Is that typical? Was he gassed in Vietnam? Do years of being exposed to the toxins of war do that to your voice? Is that supposed to symbolize the character?” A tiny moment lead me down a long path.

Then later, one of the voice-guy’s soldiers: “What happened to your voice?” “Throat cancer.” “Were you a smoker?” “Nope. Just lucky I guess.”

Clunk. They solved the mystery for us, instead of leaving it for us to do. They explained too much. They acted as journalists, rather than storytellers.

Here are ten different ways they could have handled that information better (not to be used in combination):

1. Never explain the character’s voice. This is the boldest choice, and one that probably wouldn’t fly with the network. But it’s most interesting because it allows us to fill in the gaps. When no explanation is given, the possibilities we come up with are far more dramatic than reality.

2. The character drops frequent references to throat cancer in a conscious manner. When this guy says something like “those insurgents are gonna feel like they just had chemo rammed down their throats” we’ll get it.

3. The character makes reference to throat cancer in an unconscious manner. Voice-guy would be talking about the situation and say something like “they’re like parasites that invade the organism. You don’t even know they’re there. You’ve always got to be on patrol.” We catch a reaction shot on the men to see if this registers on any of them — see them glancing at his throat, and wondering what happened to him.

4. Voice-guy speaks in a manner that really strains his voice. Juxtapose with other characters wondering if you can get throat cancer from the toxic chemicals associated with war. Never explicitly link the two, because that’s dull.

5. Voice-guy’s wife seems very concerned about his health. We don’t know why, or don’t find out why until she reveals it bit by bit.

6. Voice-guy takes medicine compulsively — or someone has to remind him to.

7. Voice-guy seems hyper-aware of certain elements in the environment that non-cancer survivors wouldn’t be aware of. Like, ducking below clouds of toxic smoke.

8. Take the other tack as the one above — voice-guy seems to have a death wish. He’s a Marine and he resents any reminders of his mortality. He rushes head-on into the fray, cancer be damned. Little reminders of his illness crop up, however, like his damaged voice and other physical reminders — getting winded, being unable to stand long periods — that tell us SOMETHING IS WRONG without having to say “I have cancer.” We get it.

9. Voice-guy lectures his men about not smoking and looking after their health. He even mentions that he never smoked, but that’s not the only thing you have to worry about.

These may be too oblique, depending on the piece. But there are many ways the information could have been delivered that would have held our attention and kept us guessing. Telling us outright helps us change the channel.

You always talk about yourself. That’s what your boyfriend/therapist/mime teacher always says.

And it’s true: everything you say is about you.

“You’re young. You can do anything you want.” [Translation: I think I can no longer do anything I want. I feel badly about that, and I think I’m doing you a favor by planting the root of that chain in you.]

Write dialogue that reflects the person who speaks. Take “Mad Men” for example. Nuanced and layered, the show’s characters speak to each other as if they were mirrors in which they see themselves.

“Who are you?” says Don when the spark of a new life arouses him — Joy in Palm Springs and Miss Farrell near the beginning of their affair. Who is this exciting, fresh, new life? Can I inhabit it? Who am I? Whoever she claims to be might be who I am, because now I’m with her.

“Who do you think you’re talking to?” says Don to underlings. Whoever they think they’re talking to must be who I am.

When Betty uncovers his web of lies, she asks him “What would you do, if you were me? Would you love you?” This single line sums up the entire series. Every character goes around wondering, asking, finding out what they would do if they were another person — and whether they could love themselves if they were. That’s what advertising is — asking the consumer “What would you do, if you were this other kind of person? Would you (finally) love you (then)?. Every question Don asks is a variation of ‘Would you love you (if you were me)?’ — when he asks ‘who are you?’ — ‘who do you think you’re talking to?’ — he’s always asking ‘would you love you?’

When Betty asks it, she asks it of herself. ‘What would I do, if I were you? Would I love me?’ Because she is Don — when she accuses him of changing his name, he says “People change their names. You did.” Every interaction is a mirror.

How do you “Mad Men” your series? Look for the parallels. The symmetry. If a character does something once, make him do it again, in another form, to himself or another character. Make every interaction a chance for each character to see himself in another — or walk away blind to the reflection in the pool. Write every line of dialogue as a container, a frame, in which to display their image of themselves — what they see when they look in the mirror. Because that’s all we ever do when we see other people: we see ourselves.